Stepping Back in Time in the Amana Colonies

In August I spent a week touring th 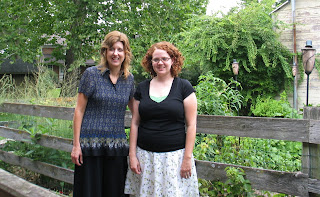 e remarkable Amana Colonies in Iowa to research my historical novels Love Finds You in Homestead, Iowa and Love Finds You in Amana, Iowa. There are seven quaint villages in the Amanas with 19th-century homes and shops built from brick, wood, and sandstone, each one surrounded by colorful gardens and trees. I felt as if I’d traveled back a hundred years or so as I visited the bakery (where they still bake on the open hearth), the rustic church buildings, the butcher shop, the mill, and the former Amana kitchens that now serve schnitzel, sauerkraut, spaetzle, and sweet rhubarb and dandelion wine.

A glassy canal cuts through the rolling farmland owned by the Amanas, and when I biked along it one afternoon, I discovered the beautiful Lily Lake with hundreds of yellow blooms canvassing the water. The Iowa River also traverses through the Colonies along with a train that woke me up at 4 a.m. every morning as it whistled and chugged its way through town.

I stayed at the Die Heimat Inn in Homestead which was built in the 1850s and used for 30 years as a communal kitchen. The Amana Colonies operated as a commune for 80 years (ending in 1932), and as part of their communal living, they ate together in community kitchens, attended church and prayer meetings together eleven times a week, and worked together either in town or in the farmlands that surrounded each of the seven villages.

No one received a paycheck in Amana. Each person worked hard at an assigned job, and then everythi 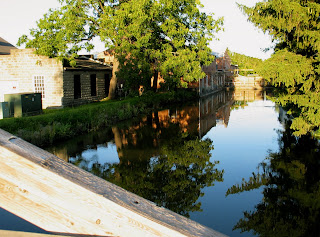 ng was provided for them–food, clothing, their home, medical care, furniture, and even the sky blue paint that added color to the rooms inside every building in the Amanas. The Amana people didn’t worry about food or any of their physical needs so they devoted their time to reading, prayer, making beautiful crafts, and helping the many transients who stopped by the Colonies for a bite to eat.

During the Great Depression, the Amana Colonies separated their church community from their business corporation. The Amanas still worked together, but they began receiving pay for their work and learned quickly how to provide for themselves. While I was visiting the Colonies, I met a number of wonderful people whose parents were part of what they refer to as the “Great Change,” and I was blessed to spend time with one 92-year-old man who grew up in Amana while it was a commune.

Even though the Amana Colonie 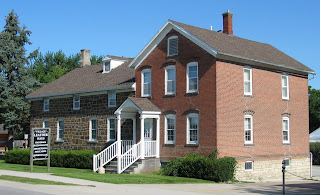 s no longer operate as a commune, there is still a strong sense of community and faith in this community. Residents value their friendships and the foundations of the Amana Church just like their parents and grandparents and great-grandparents did.

As I begin writing, I’m excited to encapsulate the strength and beauty and the community of the Amanas through these stories about characters trying to find their way home.

Here are some more pictures from my trip: